Neonatal Donors Reach for the Stars

Expecting parents who receive a fatal diagnosis for their baby can be overwhelmed by the gravity of the situation. IIAM’s Neonatal Donor Program, which began in 2012, has given these families an opportunity to add meaning to their babies’ all-too-brief lives. Through donation for medical research, IIAM enables parents to leave a lasting legacy of a life that will touch the lives of hundreds, if not thousands, of others.

In December 2018, in an effort to honor the memory of these special donors, IIAM created a program called A Galaxy of Guardians, which literally magnifies their aura. Through IIAM, OPO partners offered each of their neonatal donor families (dating back to 2012) the opportunity to name a star for their baby. The parents received a package that includes registry in the Universal Star Catalog, a star chart depicting the location of the star, software CD to find the star on a computer and a Certificate of Registry. 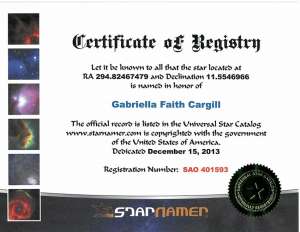 “It is important to show our appreciation to neonatal donor families for supporting the advancement of medicine in the midst of dealing with a devastating loss,” said Amberly Jones, IIAM’s East Coast Regional Director, who organized the initiative. “We hope a star named in memory of their baby will provide some comfort and an opportunity to honor their legacy.”

The gesture by IIAM has been well received by family members who have already received their star, while other OPOs are planning ceremonies throughout the year to present this memento. 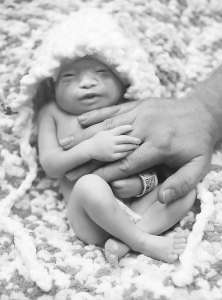 Ashley and Bryan Cargill, of Oklahoma City, OK, received a star for their daughter, Gabriella Faith Cargill, through LifeShare of Oklahoma. Ashley expressed what being part of A Galaxy of Guardians means to her and Bryan. “Gabriella’s Legacy is reaching the stars! I sit here in awe at the moment. IIAM, whom Gabriella’s organs and tissues were donated to, has chosen her to receive this amazing gift! She is one of five in Oklahoma receiving this honor.”

“Gabriella’s star is visible from the U.S., and I also received a map and a DVD that shows where the star is! It is humbling to be able to look to the stars and know that one of those stars is named in her memory. Thank you so much IIAM for this thoughtful honor!”

Additionally, OPOs offered positive responses after reaching out to their donor families:

“I was able to talk to some families on the phone and there were tears of joy and appreciation.”

“They were all so excited about the opportunity and thoughtfulness. Thank you for honoring the babies in such a special way.”

Gina Dunne Smith, IIAM’s Executive Director, added, “Each family, through organ and tissue donation, makes a profound impact on saving and healing lives of so many through medical research. Our hope is that families will find comfort gazing into the sky to see their baby’s light shining down on them.”