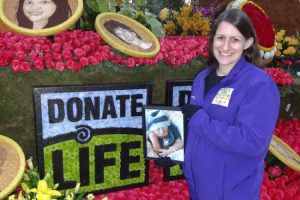 “By riding, I was able to be an advocate for donation, specifically neonatal donation. It allowed me to shine a light on donation for research, an option often overlooked. (In fact, my son is the first research-only donor to ever be represented on the Donate Life float.) It gave me the chance to represent all the other neonatal donors and their families who have given – specifically, the over 50 neonatal families who have given to research since my son’s donation in September 2012. It let me raise awareness for both infant loss and for my son’s condition, anencephaly. It let me show the world that even a brief life can have a lasting legacy. It allowed a seed to be planted in the hearts and minds of people watching – the realization that a baby can be a donor!”

“Although I was not able to share my story with each person in the crowd that day, I believe just being there, holding his picture, had an impact.”