In every eJournal issue we talk about partnerships among IIAM, OPOs, researchers and donor families, but our current lead story epitomizes that collaboration.

In the summer of 2017, Kelly and Adam Calhoon were faced with news that the baby developing in Kelly’s womb had a fatal diagnosis of anencephaly. The couple wanted to donate their baby’s organs for medical research, but for their local OPO, neonatal donation was unchartered territory; so much so that criteria at the call center did not yet capture the potential for donation from these little heroes and Lifeline of Ohio nearly missed this first opportunity. Kelly’s persistence led her to other OPOs, and Julie Plescia, Director of Organ Services at Lifebanc, became the Calhooon’s’s first of many angels in the process — looping the family and Lifeline of Ohio together in a more direct manner.

Shortly thereafter, Andrew Mullins, Director of Partner Services at Lifeline of Ohio, contacted our Executive Director, Gina Dunne Smith, and a solution began to take shape. Smith referred Mullins to Lifebanc (in Cleveland) and Life Connection of Ohio (in Dayton), since both OPOs had experience with neonatal donation.

Mullins recalled, “When we reached out to Lifebanc and Life Connection, both offered to do whatever they could to help — from providing guidance for having a donation conversation with the family, to training our recovery team, to assisting with the recovery. We are especially grateful to Kenneth Jiles, ST, CPT, Senior Organ Preservationist at Life Connection; and Eric Mojzisik, Surgical Organ Recovery Coordinator at Lifebanc.”

Less than a month later, in October, Mia Warner and Trevor Davis approached Lifeline of Ohio with similar plans following the same fatal diagnosis for the baby Mia was carrying. With everything in place for the delivery of Kelly’s baby, expected in January 2018, the OPO was confident that it would be prepared for the subsequent birth of Mia’s baby. At the same time, Mia and Trevor welcomed advice from the Calhoons.

However, the plan took an unexpected turn when Mia went into very early labor, and Nova Reighn Davis was born prematurely on November 29, 2017, at The Ohio State University Wexner Medical Center in Columbus. With all hands on deck, including Ken and Eric, the team recovered Nova’s lungs, kidneys and pancreas for medical research. 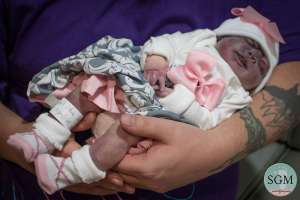 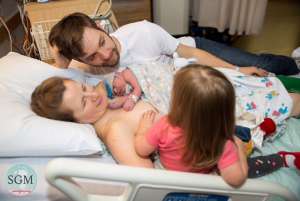 IIAM Placement Coordinator Andrea Haines worked directly with Emily Thomas, BSN, RN, Organ Recovery Coordinator at Lifeline of Ohio. “The collaboration was wonderful, making the experience smooth for mom and the family,” said Haines. “Emily kept in great contact with me throughout the entire process. Thanks to her and the entire recovery team, this case had a very positive outcome.”

Things were quiet in December, but the New Year brought new preparations. Noah Emerson Calhoon was born on January 10, 2018, at Mount Carmel Saint Ann’s Hospital in Columbus, and he lived for a precious day. With the valuable experience gained in its first neonatal donation, the Lifeline of Ohio team facilitated the recovery of Noah’s lungs, kidneys, intestines, liver, thymus and pancreas.

Mullins praised Haines and IIAM. “I want to tell you how awesome Andrea was working so closely with Lifeline of Ohio to ensure that our first neonatal recovery was a success. Our team had nothing but amazing things to say about her. I also would like to thank the people at IIAM for doing a phenomenal job for these two families, as well as the two hospital teams who bent over backwards to secure good outcomes under difficult circumstances. We’re honored to have played a part in this wonderful collaboration,” stated Mullins. Perhaps the greatest thanks goes to the Calhoons, whose commitment to Noah’s legacy paved a path that other neonatal donor families can now walk.

We also would like to thank Bethany Conkel, proud mother of IIAM’s first neonatal donor in 2012, Amalya Nathaniel Conkel, whose donation was facilitated by Life Connection. A well-traveled ambassador for neonatal donation, Bethany helped Mia and Trevor connect with Lifeline of Ohio and served as Mia’s doula.

With IIAM’s Neonatal Donation Program more than five and a half years old, Smith shared her reflections. “These little heroes generate the biggest stories and prove that at the most critical times, humanity is at its best. When a family makes the decision to donate, everyone rallies: OPOs, hospital staff, family members, IIAM and researchers. These families grieve for not only a life that is lost, but also the loss of a lifetime of expectations. Carrying to term a baby that you know will be gone, possibly in minutes, is a heavy load. By impacting lives through medical research, the baby’s life has added meaning and value.”

NOTE: Both photos were taken by Sufficient Grace Ministries (SGM) — a nonprofit, nondenominational organization located in Deshler, Ohio — which offers comfort, encouragement and hope to women and families who have lost a baby.
http://sufficientgraceministires.org